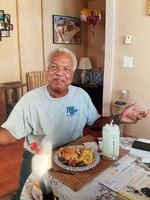 David Daniel Smith was born to Daniel and Shirley Smith on April 22, 1963 has passed away suddenly on October 29, 2020 unrelated to Covid-19. Born and raised here on Staten Island, he attended P.S. 18 elementary, I.S.27 Junior high and was a graduate of Mckee High School.David loved sports and was a proud member of both his Jr Hs and HS men's varsity basketball team. Having first met in Junior HS, David later married his wife Kathleen. David was a loving husband and father to their 2 beautiful children David Jr and Diamond. Following in his father's footsteps (the late David Smith), David established Razor Sharp Home Improvements here on Staten Island over 25 years ago. As a family owned and operated business, the legacy of Razor Sharp Home Improvements will live on through his family. Overcoming his worldly lifestyle, David was a faithful member of International Christian Center (ICC). He loved the Lord as evidenced by his dedicated service in ministry, most recently serving in Prison Ministry, Teen challenge, and Anchor House. One of the biggest blessings that Razor Sharp afforded David was the ability to minister/share the gospel and show Gods love to All he came in contact with. He touched many lives with his tenacious, uncompromised and unwavering love for the Lord. His untimely passing was a shock to all who knew and loved him. Davis is survived by his wife Kathleen Smith, his children David D. Smith Jr. and Diamond N. Smith, his mother Shirley D. Smith, sister Martha Y. Smith (Missy), a host of cousins, nieces,nephews and other family members.