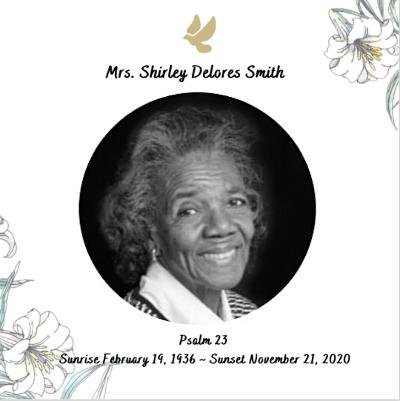 Please share a memory of Shirley to include in a keepsake book for family and friends.
View Tribute Book
Shirley Delores Smith 2/19/1936 – 11/21/2020 Mrs. Shirley Delores Smith was born on February 19, 1936 to Rosser and Laposel Munday in Monroe, Ga. She was the 10th of 10 children, the last surviving until her passing on Nov 21, 2020. The family moved to Altanta, Ga. in 1943 where she graduated from Booker T High School. After graduation she went on to Clark University for two years where she was a Majorette and received an Associates Degree in Liberal Arts. Shortly thereafter she moved to New York City ultimately landing in Staten Island, NY in 1959 where she took a position at Willowbrook State School. Soon after Shirley was introduced to her husband of 55 years Daniel Smith by her dear friend Shirley Parham. As this loving couple pursued growing their family and the American dream of home ownership, they moved out of their rental and purchased their home of 54 years in West Brighton, Staten Island. Before settling in at the US Postal service where she worked for over 20 years, Shirley worked at the telephone company where she met lifelong friends Loretta, Daisy and Thelma all now deceased as well. Shirley was a faithful member of St. Mary’s Episcopal Church on Davis Ave. She sang in the choir and was a member of the Altar society for many years. Supporting her husband as a Veteran of Foreign War, Shirley was a dedicated member of the VFW – Ladies Auxiliary and even served as County President on two different occasions. Committed to the ideals of our Democratic Republic, Shirley continued to serve as a poll worker after her retirement from the US Postal Service. A loving wife and mother, Shirley was preceded in death by her daughter Dorothea, husband Daniel and son David Daniel. She is survived by daughter Martha Yolanda, grand children David Daniel Jr., Diamond Nicole, Markus Lawrence, daughter-in-law Kathleen two great grand children Finnian Hunson, Jonah Atlas and a host of nieces, nephews and friends.
To send flowers to the family or plant a tree in memory of Shirley Smith, please visit Tribute Store
Print